I recently read an article about how many mining companies are bringing decommissioned coal mines online as coal prices surge. The coal price surge is in response to China cutting production (by limiting the number of days per year that coal mines can operate). I wondered if the fortunes of coal mining companies really track so closely with coal commodity prices.

I wrote a quick script to pull data from Quandl on the stock price of four large mining companies (versus four ‘control’ companies) relative to a measurement of coal commodity price. 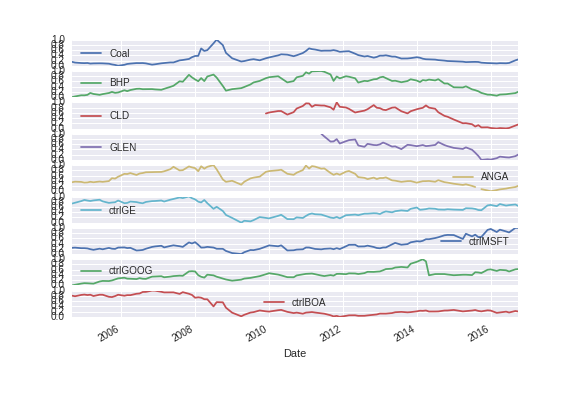 The most surprising thing, to me anyway, was how negatively correlated my so-called control companies (GE, MSFT, GOOG, and BOA) were with coal pricing. I suspect this reflects that the overall state of the economy is largely dependent, to some extent, on commodity pricing. Google represented a fairly reasonable control, as its valuation was not strongly correlated with coal price.

The next step would be to dig into the company fundamentals in order to see whether these companies actually generate more profits as coal prices increase or if they choose to expand capacity and plow revenue into investments.